Do you want to know how to fix blurry digital photos?  Let's face it. It's the biggest problem photographers have with digital photography. Don't you just hate it when an important photo you took comes out blurry? Join the club-I've have had my share.

This post gives you the 3 simple steps you can take  to avoid blurry pictures to begin with.

You'll also learn how to fix blurry pictures online, or fix them on your own computer. That's not bad, right, but wouldn't it be great if you could avoid blurry pictures to start with? Good news.  Let's look at the two main causes of blurry photos first, and then work on how to improve any blurry photos after that.

What is the main cause of Blurry Photos Do either of these types of blur look familiar?

Motion blur may be blur caused by movement of the subject or by movement of the camera lens or, by what's even more complicated, a combination movement by both. There are a few situations where you may actually want to have a blurry background to create a sense of speed, or blur the background on purpose to bring attention to your subject.

how to avoid motion blur in your photos

Of course the best way to fix blurry photos is to prevent blurriness from happening in the first place. That's the goal to achieve.  Here are the simplest and most effective ways to avoid blurry images caused by motion.

how to steady your Camera technique

Even the slightest movement of your hands can cause a slight blur in your photo. Any accessory, like a tripod or monopod is great to have along to steady your camera, but the following technique is very effective too.

You can help to avoid getting blurry pictures from camera movement during the photo exposure by improving your shooting technique. Here's what you can do: The half exhale technique:

Additionally, the way you hold your camera will affect motion blur too.

How To Hold Your Camera Properly To Avoid motion blur

Look at the techniques to properly hold and support your camera in the infographic below. 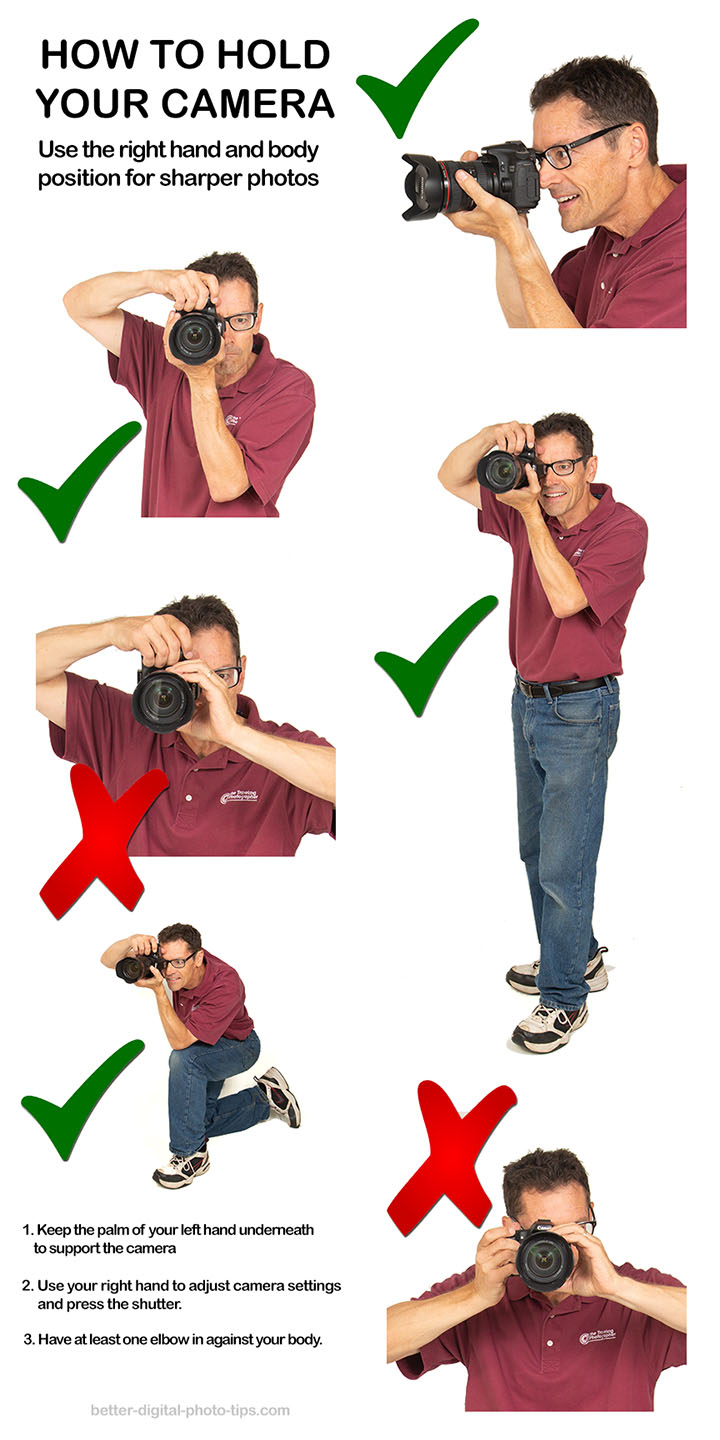 Properly holding your camera makes a big difference with sharpness

STEPS TO TAKE FOR A STEADY CAMERA

Although it's another big source of frustration for photographers, focus blur is usually the easiest issue to avoid.  Your camera's auto-focus works well most of the time, but sometimes it falls short.

There are two situations when auto-focus falls short and gives you a blurry subject.

For a complete guide to troubleshooting common issues you're experiencing with your camera's focusing system, read this post on camera focusing failures. Now, check out this example below of blur that was caused by me choosing the wrong focus point.

Be observant of any objects in the foreground of your picture that might trick your camera. Take responsibility for pre-focusing or re-composing to avoid the blurriness mistake from inaccurate camera auto-focusing.

Improvements in auto-focusing mechanisms in cameras have helped dramatically, but understanding that the camera can't "think" as well as you can will help you avoid or overcome the situations that cause blurry pictures.

how to avoid the focus blur

You can tell when the camera is struggling with focus because there is a long delay when you press the shutter button and you can often hear the lens's focusing mechanism constantly searching. Using manual focus is the best solution to fix blurry pictures resulting from auto-focusing failure.

If your camera is making the mistake of focusing on the wrong part of your subject, use pre-focusing.  Pre-focusing is aiming the exact center of your camera's viewfinder at the part of your subject you want in perfect focus, then pressing your shutter button half-way down to pre-focus, and finally re-composing the photo and pressing the shutter button the rest on the way down to make the exposure.

Here's a great example of a creative way to use focus blur. Check out this engagement photo. 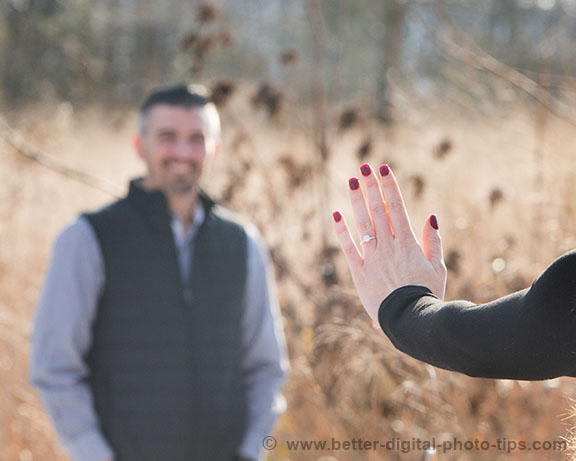 Example of intentionally blurring the background by controlling depth of field

This technique to purposely blur the background can make your photos stand out from the crowd. Here's the post showing examples of intentionally blurring part of the background with a narrow depth of field.

If it is moderate or severe focus blurriness, it's much more difficult to fix. I've had lots of success in fixing digital pictures that are just slightly out of focus. If your photos are severly out of focus, you're screwed abd you should just delete them and learn from the experience.

I learned an expert technique from Scott Kelby's book on using Photoshop for sharpening and I use that extensively when I have. It's too lengthy and in-depth for this article, but it's good if you want to invest in professional editing software to fix the blur.

If I miss the focus a little, it is often because I like to use a very shallow depth of field for portraits of individuals. I shoot with a long telephoto len set at a wide open aperture so that the range of things in focus in quite small.  I do this purposely to throw the background out of focus but it makes the placement of exact focus on the eyes critical.

How to fix blurry digital photos with software

Focus Magic is software that tackles both kinds of blur.

In particular its strength seems to be when fixing blur from slight camera movement. Focus Magic can be used as a plug-in in Photoshop as well as with other image editing programs.

You only have to buy the software once. Acclaim software, the company that makes Focus Magic lets you upgrade each time they improve the software. If you get a new computer, you just ask them for the new registration code. The first version was released back in December of 2000. It wasn't very good software at that point. Since that time, Acclaim Software has

Their website has useful tutorials on how to repair photos that are blurry from out-of-focus and motion-blur causes.

It can also remove small amounts of focus blur. Blurity has a FREE download of it's software. The free version puts an "unregistered" watermark on photo, but you can at least "try before you buy." If you like the results, you can pay for a registration key for the standard or for a pro version.

The Blurity web site has several blurry images that you can download and try the software on. On its features page, the site also does a comparison of features between Blurity, Focus Magic and Unsharp Mask in PhotoShop.

Fixing blurry photos with software can give you mixed results because each photo will have individual characteristics that will affect the repair you attempt. These factors include:

The Blurity site also has an on-line manual in its support section to help you better understand how to use the software. There is always the chance that the inexperienced user will over-sharpen the blur and get UN-natural results. It will take a bit of experimenting to get used to the software no matter how you are trying to fix blurry digital photos.

I hope you found this post. For related articles, you may find the following very helpful too:

Shutter Speed. You can avoid blur from camera movement AND subject movement by choosing the right shutter speed.

Steady Tripods. How to get the sharpest photos using a tripod.

Blur the Background. Although we want to avoid taking blurry pictures, sometimes it is desirable to intentionally blur the background. Here are two ways to do this.

Photo Exposure Tips. Understanding the exposure triangle will really help you avoid common photo mistakes. If you want to get a better understanding of how shutter speed, aperture, and ISO are related to getting the right photo exposure, read this article.

Back from Fix Blurry Photos to Other Photo Mistakes More ways to improve your photography