what is depth of field

It's the range of things in sharp focus in your photo. Once you understand this simple concept and you find out how easy it is to control.

For more descriptive definitions of depth of field jump ahead.

How to control depth of field? 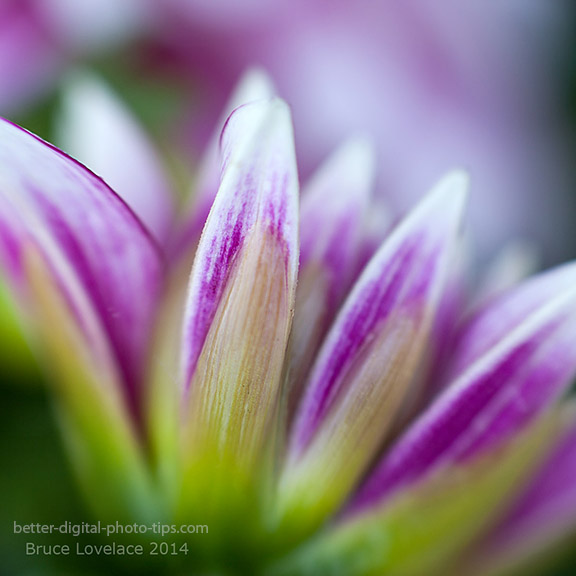 How To Control depth of field

You have 3 different ways of controlling depth of field. You can employ all three methods to get the maximum effect or adjust just one for less of the effect. The most popular and easiest method to use is to adjust your lens opening, also known as aperture or f/stop.

1. The size of the lens opening

Everything else staying the same, smaller f/stop numbers give you less depth of field. Portrait photographers (myself included) often use an Aperture Priority setting on their camera to get a shallow depth of field and a pleasing out of focus background. Using wide open f/stops like f/2.8 or f/4 will make your background less distracting because it will be more out of focus.

Landscape photographers frequently use big f/stop numbers to get a deep depth of field and make sure everything in the photo is in sharp focus.

2. the focal length of your lens

A longer focal length lens setting will give you less depth of field.

3. the distance to your subject

Depth of field is very limited when your subject is in close to your camera and is more significant when your focusing distance is farther away.

A close focusing distance will give you less depth of field.

why is depth of field so important?

Why is Depth of Field so important?  Once you learn what it is and how to control it, you can use depth of field to selectively put emphasis on the part of your photograph you want. You get control of what you want your photo to accentuate. Here's a quick example of how depth of field can affect a photo. Look at these three photos of the mannequins.

There is nothing special about the photographs, but stay here with me for a minute.

In the first photo on the left, all of the emphasis is on the male mannequin head. If you did not have the other 2 photos to refer to, you may not have even known that there was a female mannequin in the background.

In the middle photo, the emphasis is on the female mannequin. The male mannequin is still recognizable and a bit of a distraction, but the main subject is clearly the woman.

In the photo on the right is very large. That means the range of things, close to far from the camera, that are sharply in focus, is big. Completely different photograph and they were all composed exactly the same. Only the depth of field and the focusing point were changed!

An f-stop of f-1.8 means a large lens opening was used. If it's the smallest number that can be used for a camera or it's lens, you call it wide-open. This gives the smallest depth of field possible. In the first 2 photos I used this f/1,8 setting and took turns, focusing on each of my subjects. So, controlling the depth of field combined with choosing what to focus on, change the photograph completely.

In the third photo, I used a tiny lens aperture of f/16. I used manual focus and estimated a focus point between the distances of the two mannequins. This large f-stop number gave me a large range of depth of field. Both mannequins are in focus.

Here's a depth of field comparison between using the widest and smallest lens aperture. The first photo was shot at f/1.8. Hold your mouse cursor over the image to see the exact same photo taken at f/22. I attached an 85mm prime lens on a full-frame Canon DSLR and used a tripod to make sure the photos were composed in the exact same manner. You can see that knowing what depth of field is can make a dramatic effect on your photography.

My friends over at B+HPhoto made this video on depth of field and it does a great job of explaining it. The first half of the video shows you great examples of shallow and deep DOF and simple ways on how to control it. The second half of the video gets a little more advanced and is worth watching if you have 3 minutes.

a fourth way to control depth of field

You may not be able to do anything about this one, but it's good to know. Depth of field is also affected by the size of your camera sensor. Now, that's not the number of megapixels, but the actual physical dimensions of the camera sensor. DSLR cameras, particularly those with full-sized sensors, give you the ability to get both deep and narrow depth of field results.

1. The distance between the closest and farthest points that appear in acceptably sharp focus in a photograph. This is one of the most important digital photography terms to understand. It affects every single picture you will ever take. The DOF varies with the lens aperture, focal length and distances for subject and background.

2. "We can achieve critical focus for only one plane in front of the camera, and all objects in this plane will be sharp. In addition, there will be an area just in front of and behind this plane that will appear reasonably sharp. This total region of adequate focus represents the depth of field." Ansel Adams

3. What is depth of field according to John Hedgecoe? "Depth of field is concerned with the nearest and furthest parts of the subject which can be rendered sharp at a given focusing setting."

4. is the range of distances in a photo where the image is said to be "sharp". Technically, only one plane of the image can be in exact focus, but all distances lying within the DOF range are perceived as "acceptably" sharp.

Articles Relating to What is Depth of Field

Examples of Depth of Field This article has several photo examples on the proper use of DOF to improve your photos. The photos are critiqued on how the lighting and composition are also considered when determining your camera settings.

If you are looking for a good understanding on shutter speed, ISO settings and aperture, there are also several good videos on basic and advanced digital photography techniques.

If the article on What is Depth of Field was helpful, please share. It's a great time to be interested in photography. Happy Shooting!

Learn The Basics
of Digital Photography.